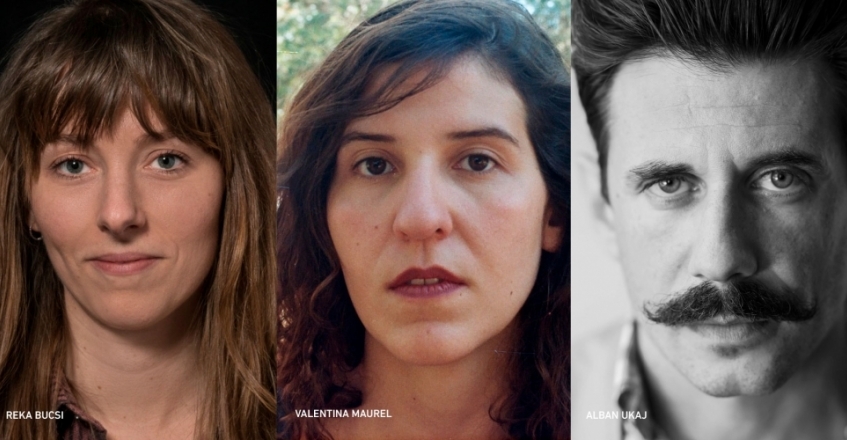 Réka Bucsi is a Hungarian animation filmmaker. She graduated from Moholy-Nagy University of Art and Design in 2013. Réka's graduation filmSYMPHONY NO. 42 was shortlisted for the Oscars in 2014. Her personal films were screened at various film festivals, including all of them premiering at the Berlinale and further playing in competition at Sundance, Ottawa, AFI Fest, BFI London Film Festival and SXSW. Réka’s short film LOVE was nominated for Best Short Film at the European Film Awards. Her film SOLAR WALK won the Audi Short Film Award at the Berlinale 2018, was nominated at the Annie Awards for Best Short Film and is now part of The Criterion Collection. Réka was one of the Berlinale Shorts International Jury members at the 2020 Berlinale. She was a speaker at Pictoplasma both in Berlin and NYC, Pratt Institute NYC, The New School NYC, FMX Conference on Animation Germany and a guest teacher at California Institute of the Arts. Réka’s clients include Cartoon Network, Adult Swim, Netflix and FX Networks. Réka was invited to become an AMPAS member in 2021.

Valentina Maurel
Director, Costa Rica
Valentina Maurel, of franco-costarican origin, obtained a degree in Filmmaking from the Insas in Brussels. She received the First Cinefondation Prize at the Cannes Film Festival in 2017 for her graduation film PAUL IS HERE.  LUCÍA EN EL LIMBO her second short film shot in Costa Rica, was selected at the Critics' Week at Cannes 2019, at the Toronto International Film Festival TIFF and received the first prize at the Guanajuato International Film Festival in Mexico.  Her first feature TENGO SUEÑOS ELECTRICOS will have its premiere in 2022 at the international competition of Locarno's Film Festival 75th edition.

Alban Ukaj was born in 1980 in Pristina, Kosovo. He graduated from the Academy of Performing Arts in Sarajevo in 2006. As an actor, he received numerous best actor theatre awards in the region. Ukaj is a permanent member of the SARTR theatre ensemble in Sarajevo.  Ukaj's filmography includes roles in FUSE by Pjer Žalica, NOTRE MUSIQUE by Jean-Luc Godard, MAGIC EYE by Kjutim Cashku, ALL FOR FREE by Antonio Nuić, NIGHTGUARDS by Namik Kabil, LE SILENCE DE LORNA by Jean-Pierre Dardenne and Luc Dardenne, awarded at the Cannes Film Festival, ON THE PATH by Jasmila Žbanić, J.A.C.E. by Menelaos Karamaghiolis, DREAMS by Rešad Kulenović, BOTA by Iris Elezi, awarded at the Karlovy Vary Film Festival, THE MARRIAGE by Blerta Zeqiri, awarded at Tallinn Black Nights Film Festival, Oscar nominated QUO VADIS, AIDA? and most recently he stared in Dardenne borthers' TORI AND LOKITA, that premiered in Cannes in 2022, while the series KOTLINA in which Ukaj plays, directed by Oscar wining director Danis Tanovic is in post-production. Ukaj won a price for outstanding actor in Cottbus film fest for the role of Hamza in a movie directed my Nermin Hamzagic FULL MOON wich was also nominated for European Academy Award. His first short feature film HORSE, for which he wrote the screenplay as well, has been awarded at several international festivals in Europe and America.

Sarajevo Film Festival is proud to present this slate of films that reflect what the European Shorts section stands for: young, European authors who are not afraid to break the mold, experiment with form, and create brave work exploring the most challenging of themes.

AGRILOGISTICS looks at recent technological transformations in contemporary industrial agriculture. Tulip bulbs, chrysanthemum stems, and vine tomatoes are processed through cameras, feeding datasets that regulate their own growth. At night, however, when the factory stops, the greenhouse becomes an oneiric chamber where plants, animals, and machines form new entanglements.

Maïa will soon get married. It's the occasion to get together with her female friends for a weekend in the countryside. But the party gives way to melancholy: Maïa realises how much she is leaving behind as she says goodbye to her girl’s life.

Attempting a backflip in real life is not safe – you might break your neck, or land on your head, or land badly on your wrists. None of that is nice, so the avatar does the trick. It practices on a 6-core processor with the help of machine learning. The processor is not the newest but still calculates six jumps per iteration. One iteration takes one minute, this is 360 jumps in an hour and 8,640 jumps in a day.

A recently retired man invites his son to help him pick the cherries in the garden. The father is in no hurry to finish the job, though, as he tries to catch up with his son. The cherries remain in the background.

Rita is a member of a women's choir that is in danger of breaking up because they’ve lost the municipal subsidy that allowed them to rent their rehearsal room. Now, the group has to decide whether or not to accept sponsorship from one of the companies causing the most pollution in the valley.

It's New Year's Eve. Jim and Morten play videogames all night long, as they do every day. But tonight, Morten is uncomfortable.

On a remote coast of the Siberian Arctic in a wind-battered hut, a lonely man waits to witness an ancient gathering. But warming seas and rising temperatures bring an unexpected change, and he soon finds himself overwhelmed.

Through a photographic narrative, this film presents texts by Marko Tomaš, a poet from Bosnia and Herzegovina. Marko and Maja are moving flats in Sarajevo. Maja's depression turns Marko's struggle into poetry; when they are played on the radio, Marko’s poems become the last bridge of communication between them.

Polia, Solomiia, and Mariia perform in the local theatre. After the spectacle, they meet a man and walk through the night city together. Polia seems to fall in love with him. In the morning, he will leave the city and they will not see each other again.

Three characters in search of poetic and liberating breaches in a gradually authoritarian Paris,on the verge of implosion. Each in their own way crafts a situation, where, alternately, a sense of lightness can be found, suffocated screams can rise up, and reality can be distorted into new horizons.

In 1983, French actor Maria Schneider gives an interview for the television show "Cinéma, Cinémas." The conversation takes an unexpected turn when she challenges film industry practices and is asked to talk about the controversial 1972 film LAST TANGO IN PARIS.

Leszek and Mikolaj, an unusual couple, move into a stud farm that one of them inherited from his father. When Mikolaj discovers someone has destroyed their wooden fence, he becomes obsessed with fixing it. Can the fence really protect this relationship from a hostile environment?

As a mountainous village in Greece sinks beneath the surface of the lake, the memories of its inhabitants emerge from the water.