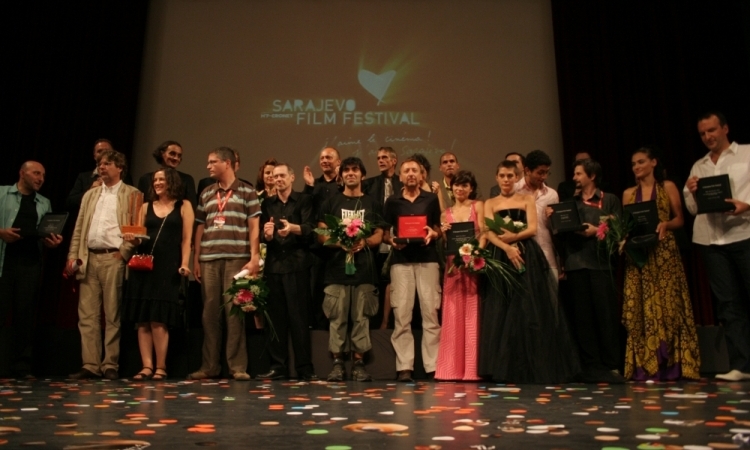 Heart of Sarajevo for Best Film:

A MAN’S FEAR OF GOD / TAKVA

Main award of the Sarajevo Film Festival’s Competition Programme provided by Ministry of Culture and Sport of the Federation BH (25,000 €)

Heart of Sarajevo for Best Actress:

Heart of Sarajevo for Best Actor:

Heart of Sarajevo for Best Film:

Financial award in the amount of 3,000 € provided by Sarajevo Film Festival

THE MOSQUITO PROBLEM AND OTHER STORIES

The winner of this year’s award is director Cary Fukunaga and his film VICTORIA PARA CHINO, chosen and presented by John Lyons President of Production at Focus Features.

First of all Felicia by Melissa de Raaf and Razvan Radulescu

This Award for the Best Short Film, in the amount of €2000, is presented by United International Pictures and carries a nomination for the European Film Academy (EFA) Award.

The EDN Talent Grant was established through the cooperation of the Sarajevo Film Festival (SFF) and the European Documentary Network (EDN), and is aimed at providing support to talented directors of documentary films from the Balkans. The Award covers the costs of attending the Pitching Workshop in Thessaloniki in March 2008, where its recipient will have the opportunity to develop and present his or her new project.

A MAN’S FEAR OF GOD / TAKVA

The International Confederation of Artistic Cinemas (CICAE) will also present an award to a film in the Competition Programme. The chosen film will receive special CICAE support in its distribution, screening, and the reaching of an audience through a network of 3000 cinemas.