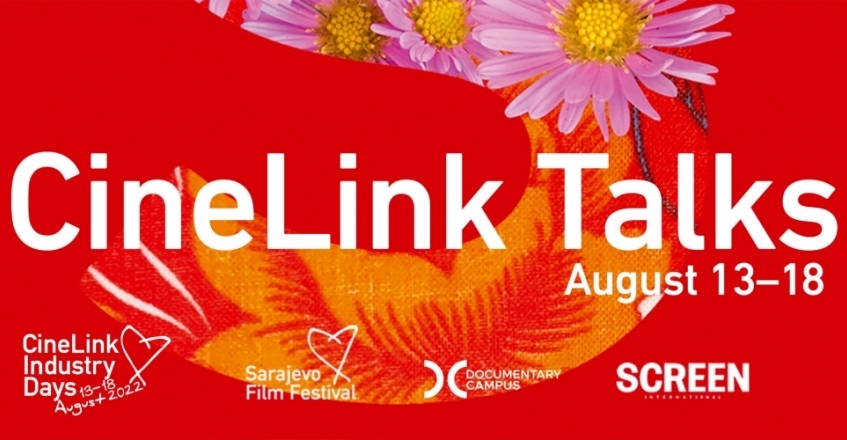 This year’s edition of CineLink Talks, CineLink Industry Days conference part will host 21 panels and 59 speakers. From 13th to 18th of August, for the first time on 3 locations, the audience will have a chance to listen to the leading industry experts, policy and decision makers and creators on various topics, from gender equality to film and drama series financing.

Five panels organized in partnership with Documentary Campus will touch upon distribution challenges, new funding strategies for social impact films, middle players in film industry and the responsibility of documentary filmmakers in fake-news era. Finally, in collaboration with House of Shorts, the panel on short films will host representatives of leading tech companies like Vimeo and WeTransfer.

Leading policy experts will assess the consequences of 2020 50/50 movements on inclusion within the industry. Our audience will have chance to learn more about co-production possibilities with United Kingdom, Turkey and Italy.

In these challenging times, we couldn’t shift focus from social issues. Film professionals and creators from Ukraine will share their experience and outlook on producing during the war. In this edition, through partnership with UNHCR, we will see the representations of people forced to flee in contemporary cinema through three case studies.

Finally, focusing on the Southeast region, through the case study of Serbian film industry we will discuss the main challenges to its sustainability.

The CineLink Talks line-up is available below:

If art and culture bring public benefits, create social bonds, and express communal meaning, how can we harness the power of film to promote peace? Acknowledging the importance of public policies in the arts and culture, we have gathered international public policy-makers to share their experience. Together, we will look at different approaches to developing impactful cultural public policies, fostering film to become a catalyst of a more sustainable and innovative future.

Every day we are surrounded by the famous, yet unknown keyword – Gen Z. We listen and learn about their habits - what they watch, how they consume information, their likes and dislikes. Relevant voices from the region share their experience on how to remain interesting and keep momentum by creating content that will appeal to young audiences.

The True Stories Market is dedicated to improving dialogue among the countries of former Yugoslavia, which are faced with deep and far-reaching consequences of the aftermath of past conflicts. The market presents four cases selected from the archives of key organisations that work to document the Yugoslav Wars to film and TV professionals. This serves as an open source for filmmakers to weave stories that can address larger audiences, with all the urgency and power that cinema has to offer. After the festival, in order to facilitate the transition of these stories from market to screen, an open call invites filmmakers to apply to execute a project inspired by one of the cases highlighted by the market.

Films can change the way we see and experience the world. They can also change legislations, lobby for social causes, campaign for human rights, and even topple governments. In an industry increasingly interested in entertainment, where subscriptions are a measure of success, are there any new ways to finance the films that want to change the world as we know it? Four marketing and distribution experts for social impact films will share their insights on the current financing landscape and how they imagine the future of films to change.

Role of telecommunication operators in the region of Southeast Europe has entered a new era with investments in the drama series production. Telecom Serbia showcases the slate of its upcoming drama series.

Organised by the Ji.hlava International Documentary Film Festival, Docu Talents from the East presents upcoming documentary films from Central and Eastern Europe. Nine new feature-length creative documentary projects, in production or post-production, pursue appropriate market-access points during CineLink to further their conversion and placement efforts. The selected projects are slated for release between September 2022 and November 2023, and are introduced by the director and the producer in eight-minute overview presentations, which include three-minute trailers. This year selection pays special attention to Ukrainian women filmmakers.

MIKE GOODRIDGE is an international executive producer whose company Good Chaos was established in 2017. In post-production are Helander’s SISU, Yang’s SOME RAIN MUST FALL, Sigurdsson’s NORTHERN COMFORT and Mortezai’s EUROPA. He has projects set to enter production in 2022 and 2023 with Shih-Ching Tsou, Sean Baker and Jessica Hausner. Mike was co-producer of Ruben Ostlund’s TRIANGLE OF SADNESS and executive producer of Jasmila Žbanić’s QUO VADIS, AIDA?. He was previously CEO of Protagonist Pictures, financing and distributing acclaimed titles: COLD WAR, THE LOBSTER, THE FLORIDA PROJECT, THE RIDER, LADY MACBETH and GOD’S OWN COUNTRY. He is an executive producer of AMERICAN HONEY, THE DISCOVERY and THE DINNER, among other films. Mike Goodridge oversaw the production of over 70 films which received multiple Oscar and BAFTA nominations, and A list Film Festival prizes. In addition to his crucial roles in renowned festivals worldwide, he is also a member of BAFTA and the board of the European Film Academy.

How is the rapidly changing documentary industry influencing strategies in film sales, curation, acquisition, means of distribution, screening and launch strategies, to name just a few of the areas that professionals situated between filmmakers and audiences have as their core expertise? What exactly is transforming, and which new strategies are in the making? How do sales agents, distributors, aggregators, and film festivals define and develop their current roles in this context and in a world with increased uncertainties? For documentary professionals change is inevitable. Yet, the speed at which things shift, calls for our additional attention and reflection.

Role of telecommunication operators in the region of Southeast Europe has entered a new era with investments in the drama series production. BH Telecom showcases the slate of its upcoming drama series.

How did co-productions influence not only financing but also the creativity in the film industry? How are the players investing in co-productions repositioning in the global market? By looking at successful stories of British Film Institute, Turkish Radio and Television Corporation and the Italian Directorate General for Cinema, we try to answer these questions and open a fruitful discussion about the future perspectives.

16:00 – 17:00 | Hotel Europe Atrium
HOW CONTEMPORARY CINEMA PORTRAYS THOSE WHO HAD TO FLEE?
Presented by UNHCR

Today, one in every 88 people in the world is forcibly displaced. This unfortunate situation requires attention, not only from political actors. By tapping into the heart of the purpose-drive, socially engaged film, questions arise: How can we provoke compassion? How can we raise the sense of individual responsibility in all of us – creators and viewers? Through three case studies, three documentary features ALONG THE WAY by Mijke de Jong, AS FAR AS I CAN WALK (STRAHINJA BANOVIĆ) by Stefan Arsenijević and documentary short WHEN WE WERE THEM by Danis Tanović and Damir Šagolj, we explore the representations of those who had to flee in the contemporary cinema.

Today documentary films have the power to make sense of a complex world, deliver knowledge and emotion, uncover and fight injustice, open the eyes of the audience towards essential issues. They reach a large audience. With great power comes great responsibility. How do we deliver fact-based stories in the fake-news era? How do we gain, as opposed to lose, the trust of viewers? How do we deal with censorship? What is the filmmaker’s responsibility towards the characters he or she films? How do we keep control of the message after the film is completed? Those and other questions will be discussed with a panel of filmmakers and field experts.

More than a filmmaker’s calling card, short films are a format of choice for many audiences online. For the filmmakers, shorts are a way to show artistic choices and skills. They are discovery portals into an artists’ vision while offering the makers a way to network and approach the industry with a less risky option in terms of budget. But they are not getting any easier to finance, and distribution of shorts seems overflooded. Our panelists will share their vision about how to make short films that can stand out. How to finance, craft and showcase them and what are the advantages of making shorts in the current landscape.

The past decade witnessed the rise of various iterations of the 50/50 by movements in 2020, which have intersectionally coincided with calls for greater ethnic participation in these movements, and the industry at large. During the last two years the film industry has questioned its role, responsibility and actions in a paradigm that remains status quo. In the context of the proliferation of statements, open letters and some concrete actions, this panel will explore what is the most up to date national policy on inclusion in some of the selected countries. The panel will discuss the funders’ view of diversity and inclusion measures proposed on both national and regional levels. It will highlight selected policy tools which prove to be effective, and address challenges which funders need to overcome.

Serial audiovisual works are probably the most watched and discussed content today. It is also the sector facing the most dynamic and accelerated evolution. What are the new drama initiatives in the European context? We gathered the biggest European companies to share their insights in the new drama tendencies and the new players to watch.

Following a conversation we started in 2020 on re-imagining distribution strategies for independent films, two years later, this panel invites independent producers to discuss the challenges presented by the current film distribution model and how this is changing the producer's scope of work.  Are collectives of producers the only possible future of independent films? Or going rogue and nimble will provide a better chance to thrive? A conversation to think together about the producer’s role in a landscape where the fight for rights and access to audiences is just the tip of the iceberg.

THURSDAY, 18 AUGUST
12:00 – 13:00 | Hotel Europe Atrium
A BUBBLE OR A BOOM? A CASE STUDY OF SERBIAN PRODUCTION CAPACITIES AND INFRASTRUCTURE DEVELOPMENT

The film industry in Serbia has flourished in recent years. With production capacities booming, the question poses itself – how to keep the industry sustainable? Our distinguished panelists will help us understand which factors determined this expansion and shed light on future challenges for the professionals in the field.

How do women get to tell their own stories and create their own representations? Through the lenses of director, producer, and casting director, we gathered powerful female voices from different backgrounds, generations, and experiences to navigate how female solidarity in the film industry can be achieved.

What are the long and short term consequences of the war on the film industry in Ukraine? Which stories do filmmakers choose to tell? How to produce in a war-torn environment? From production capacities to main themes and ideas, Ukrainian creators and industry professionals discuss the main challenges facing their industry.