Docu Talents from the East: Call for Submissions is now open

The 18th edition of the Docu Talents from the East – traditional presentation of the most remarkable new documentary projects from Central and Eastern Europe – will take place on August 15 during Cinelink Industry Days at Sarajevo Film Festival. 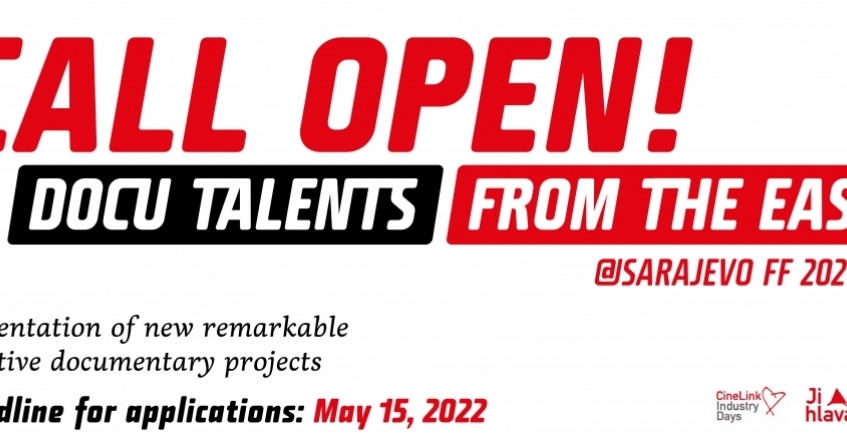 “We are looking forward to this year’s physical event, after holding two previous Docu Talents’ editions online only,” says Marek Hovorka, director of Ji.hlava IDFF which has curated the programme since 2005.

Docu Talents @Sarajevo will take place on August 15. The presentations by directors and producers of eight selected documentary projects will be followed by one-to-one meetings with sales agents, festival representatives and other decision-makers accredited at Sarajevo FF. The most promising project will receive a financial prize 5,000 USD in cooperation with the Ji.hlava IDFF’s partner Current Time TV.

The call for submissions to the 18th Docu Talents from the East is open until May 15. The eligible projects include mid-length or feature-length documentary projects at the post-production stage with expected premiere between September 2022 and August 2023. The eligible countries are Albania, Armenia, Azerbaijan, Belarus, Bosnia and Herzegovina, Bulgaria, Croatia, Czech Republic, Estonia, Georgia, Hungary, Kosovo, Latvia, Lithuania, Moldova, Montenegro, Northern Macedonia, Poland, Romania, Russia (only for projects not supported by the Russian state institutions), Slovakia, Slovenia, Serbia, Ukraine.

Since 2005, Docu Talents has been a launch pad for a number of documentaries by both renowned and emerging directors such as Laila Pakalniņa, Vladimir Mansky, Bartek Konopka, Piotr Stasik, Peter Kerekes, Dmitrii Kalashnikov and Helena Třeštíková.  Films presented at Docu Talents in the past had world and international premieres at major film festivals including in Cannes, Berlin, Locarno, Rotterdam, and Sundance.

“We have been following the region of Central and Eastern Europe through Docu Talents for 18 years, thus promoting the cinematography which is often omitted by others. And every year the selection confirms to us that there are many new authors to discover”, says Marek Hovorka, director of the Ji.hlava IDFF and curator of Docu Talents.

The programme is held as part of the Visegrad Accelerator supported by the International Visegrad Fund.