The most anticipated regional TV achievements in the Avantpremiere Series Programme

As part of this year's Avantpremiere Series programme of the 27th Sarajevo Film Festival, the audience will be presented with the five latest drama series. The festival audience and film professionals will have the opportunity to watch the first two episodes of the first seasons exclusively on the cinema screen, and meet the cast of the series: AWAKE, TIME OF EVIL, BAD BLOOD, BLACK WEDDING and THE GOLDEN BOY. 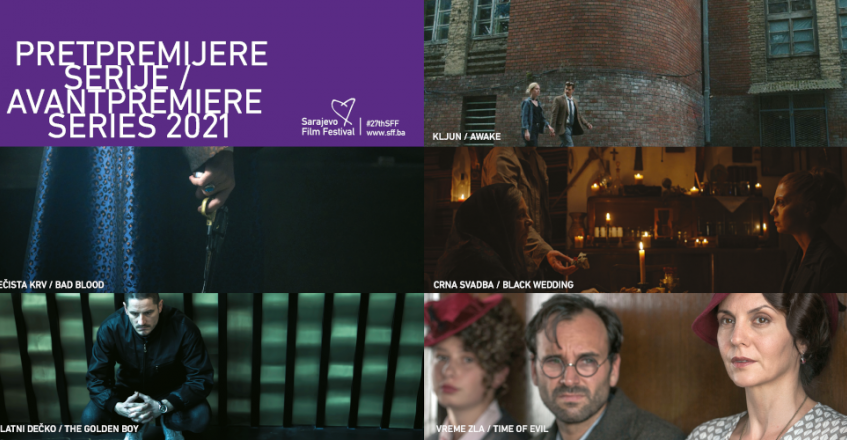 The programme will be opened with the premiere of the series AWAKE. The crime series that follows the life of a young female detective with parapsychological powers was directed by a successful director duo: Jelena Gavrilović and Uroš Tomić. Their last joint work, the GROUP series, premiered in the Avantpremiere Series programme on the 25th Sarajevo Film Festival is also the first Serbian series whose global distribution rights were bought by Keshet International, the leading Israeli media company.
The festival audience will also have the opportunity to watch episodes of the series TIME OF EVIL directed by Ivan Živković, with a plot set in Serbia before and during the World War II. This is a historical drama based on novels by Dobrica Ćosić, which, like the AWAKE series, was produced by United Media.
Both series have a great cast. The roles of Ivana Vuković, Drena Mršić, Ljiljana Blagojević, Mićko Ljubičić and Filip Đurić stand out in the AWAKE series, and Nada Šargin, Goran Bogdan, Goran Šušljik, Andrej Šepetkovski, Radovan Vujović and Žarko Laušević have roles in the TIME OF EVIL series.
The drama series BAD BLOOD, which was developed in the CineLink Drama programme of the Sarajevo Film Festival, and was produced by This and That Production and RTS, will also have its world premiere. It is based on the literary work of Bora Stanković, and the screenwriter is Vojislav Nanović. The series, directed by Milutin Petrović and Goran Stanković, follows the downfall of the old landlord's family, through which the weakening of the Ottoman Empire and the formation of new nation-states are depicted in parallel, and Dragan Bjelogrlić plays the main role.
The programme also includes the BLACK WEDDING series, a psychological thriller that introduces viewers to the world of magic and ancient rituals through a crime story. It is directed by Nemanja Ćipranjić, and the characters are interpreted by regional stars such as Uliks Fehmiu, Nikola Kojo, Jelena Đokić and Slavko Štimac. The series is one of the latest projects of the production house FireFly.
The last screening in the Avantpremiere Series programme will be episodes of THE GOLDEN BOY series. This is the directorial debut of Ognjen Janković, in which the talented football player Denis Marković is played by rising star Denis Murić.
"In the last year marked by a pandemic, in which everything seemed to stand still, there was an incredible increase in viewers of online series, both of world and domestic productions. However, not all the film industry stood still, because, despite the difficult conditions, films and series were made in the region. In the production of the regional drama series this year, Serbia is certainly in the lead, which is evident in our selection for this year, characterized by striking performances of regionally famous actors and topics related to this area. The programme includes suspenseful crime dramas, a psychological thriller with an aspect of mystery, series based on famous literary works and a contemporary story about dreams, idols and football. All these series that viewers across the region are eagerly awaiting will be premiered at the festival in the Avantpremiere Series programme, and only in the autumn / winter season will they be on the programs of regional TV companies", said Tina Hajon, programmer of the Avantpremiere Series programme.
In this programme, drama series compete with each other for the Audience Award sponsored by Mondo.rs, and are directly shortlisted for nominations for the Hearts of Sarajevo Awards for TV series that will be awarded on the 28th Sarajevo Film Festival.
The Avantpremiere Series programme is exclusively dedicated to regional drama series. Profiling is the result of the growth and development of this festival program through the extremely successful collaboration of CineLink Drama, the festival platform for the development of TV series, and the Avantpremiere Series programme - in which the final product is shown.
The 27th Sarajevo Film Festival will take place 13-20 August 2021.
The sixth edition of Avant Premiere Series with six drama series from four countries of the region
The most anticipated regional TV achievements in the Avantpremiere Series Programme