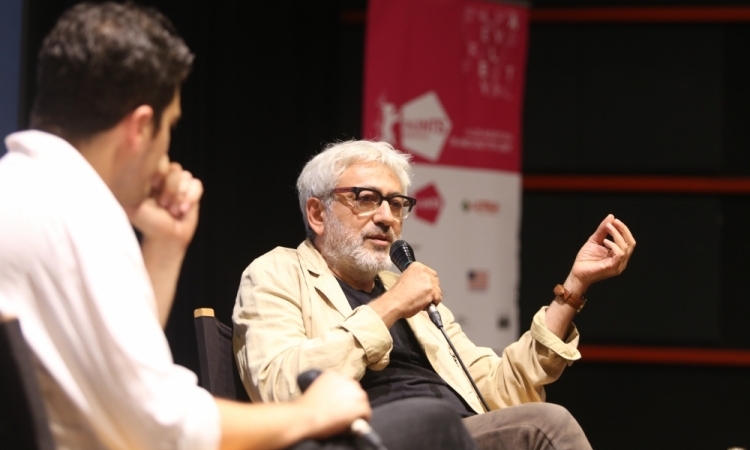 The face on the screen can be clearly illuminated and outlined. It can also appear as if its features were escaping its outline and blending in with the background. As if the face became its surrounding landscape. Close-ups in film have tremendous power to make us forget about time and space. Through their affective powers, we can be confronted with the borders of known and familiar and at the same time we can be invited to sharpen our senses.

The Script Station sessions are designed to provide a space for constructive discussions about specific script issues to support and encourage their further development and bring them to the next level of completion. The lab consists primarily of one-on-one meetings with mentors Teresa Cavina, Jan Forsström and Olivia Hetreed during Talents Sarajevo, time during the festival for rewriting and rethinking between sessions, and follow-up conversations in the future.

Since 2010, Pack&Pitch has supported emerging directors and producers in preparing their projects for the marketplace. Within the Pack&Pitch framework, participants learn how to analyse and prepare their projects for effective written and oral presentation. Talents are mentored in group and one-on-one session by pitching trainers, who instruct them in the creation of one-pagers and the analysis of projects, and provide insight into the all-important subjects of how to pitch, and to whom.

Over the course of several days of intensive sessions, Talents prepare written and oral presentations of their projects, which they pitch at the end of the programme to a five-member jury and an audience of their peers and industry professionals. The Talent who makes the most successful pitch is invited to participate in the Sarajevo Film Festival’s CineLink programme in 2018, and receives an in-kind award worth €4,000 in post-production sound servies from Studio Chelia.

The Film Stage Studio provides Talents with a cross-disciplinary experience that brings together actors, writer-directors and cinematographers in a series of casting exercises, scene workshops and rehearsals culminating in a live performance. Over the course of the five-day lab, Talents explore the nature of dramatic structure, character development and visual forms. The Film Stage Studio develops creative interaction among participants in a safe workshop environment.

Under the tutelage of Film Stage Studio mentor Gyula Gazdag and Acting Studio mentor Ermin Bravo, three short scripts, submitted by Talents, are each workshopped twice, under the direction of six directors. This allows scenes to be considered from differing directorial, cinematographic and performance points of view. The Studio emphasis is on exploration of the scene-building experience, rather than on the final product – the possible permutations are limitless, and the live presentation represents six realisations of the cinematic creative process.

Acting Studio Talents participate in workshops designed for actors, where they exchange their insights, rethink their craft and enhance their acting skills. They are also prevailed upon to develop their artistry within the Film Stage Studio programme, where they help realise three scenes written and directed by six other Talents, and deliver the final product to an audience at the culmination of the programme. Six performers also participate with the cinematographers in Camera Studio sessions to make a short film.

Together with director of photography Tudor Mircea, Camera Studio participants spend three days shooting a short, six-scene film in and around Sarajevo, assisted by Talents selected from the Acting Studio programme. Daily footage is then delivered to the Editing Studio team, who will craft an an edit of the work to be presented to the entire Talents Sarajevo group at the final wrap-up session. Several cinematographers will also lend their skills to the Film Stage Studio to help realise their final presentation.

The Talents Sarajevo Camera Studio is supported by the Academy of Performing Arts in Sarajevo.

For the first time this year, the Talents Sarajevo programme features sessions for editors. Working with acclaimed FAMU professor Ivo Trajkov, Talents editors work with material shot by Camera Studio participants to assemble a short film. The results will be shown to all Talents at the final Wrap Up session.

The Talent Press sessions are tailor-made for emerging film critics and journalists from the region of Southeast Europe and the Southern Caucasus. Through the platform, film criticism is introduced as a tool for the contextualization of filmmaking practices within the region and in relation to other European countries, and for further enhancement of film language. Six film critics review films and events throughout the festival. Coached by three prominent film critics via group and one-on-one sessions, participants further develop their skills with articulating their impressions and insights in the form of written articles, interviews and radio reportage for the Talents Sarajevo website and those of its media partners.