At last year's Sarajevo Film Festival, the feature film production scheme Sarajevo City of Film for Global Screen (SCF GS) was launched by the festival and TRT TV Movies. During the 23rd Sarajevo Film Festival the film selected to be produced within SCF GS was announced - A Good Day's Work, by Slovenian director Martin Turk. 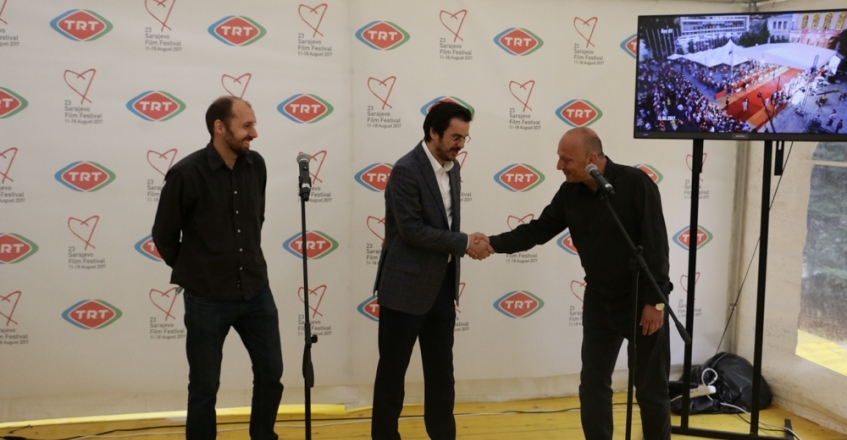 Sarajevo City of Film for Global Screen is a pilot project for the production of micro-budget films targeted to wider audiences, aimed at delivering fiction projects from Bosnia and Herzegovina, Croatia, Kosovo, Macedonia, Montenegro, Serbia and Slovenia.

A Good Day's Work is a character-driven social drama that tells the story of a Andrej, an ordinary man struggling to find his place in life. His story reflects how the devaluation of human integrity is one of the most painful consequences of any crisis.

The film will be set and shot in Sarajevo, where the shoot will commence in late October, with Croatian cinematographer and acclaimed music video director Radislav Jovanov Gonzo as DOP. Casting is underway.

Martin Turk, born in 1978, is a graduate of the Academy of Theatre, Radio, Film and Television in Ljubljana (AGRFT). He has made a number of award-winning short films that have screened around the world, including Every Day Is Not the Same, which premiered at the Directors’ Fortnight in Cannes. In 2009, he was selected for the Cannes Cinéfondation Residence with his feature project Feed Me with Your Words (2012). A Good Day's Work will be Turk's second feature, and he is currently developing a third, slated to be shot in 2018.

”Sarjevo City of Film for Global Screen offers filmmakers from our region the chance to have a film financed and made quickly, and seen by large audiences on TV and in cinemas. So we were not surprised, but very happy, to see strong interest and a large number of applications. We can't wait to see the finished film next year, and hope to share it with audiences at the 24th Sarajevo Film Festival.”

”I want to portrait a man who tries to stay honest and proud no matter how the things are going wrong. This is a project that has a long history, since I started to write it as a short film six years ago. But it looks like it had a life of its own and it needed to grow and to travel to find the right place to became reality. It found Sarajevo as the right place and I am very excited to accept this new challenge, a new experience, with new people in a new place.”

”Our interest in Sarajevo Film Festival is a reflection of the cultural legacy shared between Turkey and the Balkan region. The film industry is somehow an intersection between culture and economy and we see the partnership between TRT and SFF as a beginning with great potential. Through this project we can support the creativity and film talent in the Balkans, and at the same time bring the selected film to the audiences of one of the biggest TV networks in the region and Europe.”

Sarajevo City of Film for Global Screen fully finances and cash flows the selected project with €200,000 in cash, and supports the development process, supervises production and helps place the project in the international marketplace. In addition, filmmakers are offered a carefully designed programme that provides access to multi-level expertise and individual mentorship throughout the production process. One aim of SCF GS is to promote the growing connection between the TV and feature-film markets, both artistically and in terms of production.