Docu Talents from the East 2022 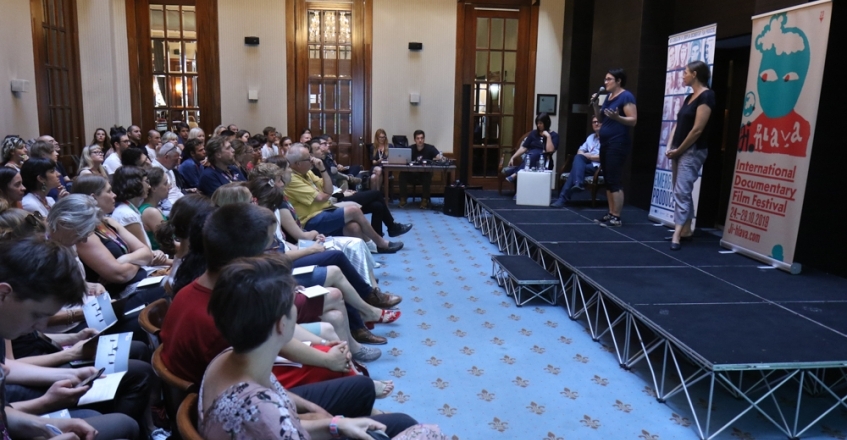 Nine new creative documentary projects, in production or post-production, will be presented as part CineLink Industry Day on August 15, in order to stimulate their further conversion and enhance their market exposure. The Open presentation will take place at Hotel Europe – Atrium from 14.30 – 15.45.

The most promising project receives the Docu Talent Award in co-operation with Current Time TV. The award is accompanied by a prize in the amount of 5,000 USD. DAFilms Distribution Award 2022 will be awarded to a project selected by the jury in the amount of €3000 as an in-kind Doc Alliance distribution award. It covers release on DAFilms (including Americas,  Europe,  Asia) for two years. The jury consists of Natalia Arshavskaya (Current Time TV), Martichka Bozilova (Agitprop), Ben Dalton (Screen International), Nina Numankadić (DAFilms), Jarmila Outratová (Ji.hlava IDFF).

„The selection of films included in Docu Talents from the East that are being completed by the emerging generation of Eastern European filmmakers is formally very diverse and explores social, political and purely personal topics. It is surprising that a region often associated primarily with rural films from poor regions can geographically encompass literally the entire world: from Tokyo and Iran to Europe, New York and Salvador.

Our selection pays special attention to two Ukrainian women filmmakers. While Olha Tsybulska started filming YOU KNOW IT'S GOING TO BE ABOUT WAR spontaneously at the outset of the war, the very personal DAD’S LULLABY by Lesia Diak looks back on the war after several years and shows how it can destroy even an exceptional human personality.

All of the selected films do not only explore the phenomena of our day-and-age, but also ask questions about how our choices shape our own future – whether as an individual, a particular social group or an entire society.”  says Marek Hovorka, director of the Ji.hlava IDFF.

Projects were selected by representatives of the Ji.hlava IDFF.

Is it possible to be a worker and revolt against the capitalism? Is the outcome of every possible riot known in advance?

A small-town photographer from Europe takes New York by storm. But at what price?

A witty and sensitive observation of people visiting Central Park of Tokyo – Yoyogi.

Young, urban poets of the Brazilian favela in the city of Salvador. Jeopardised youth. A film about non-material wealth, which becomes a source of unusual human power and lets us believe that we all have this power within us.

Two women, former classmates and friends, one Romanian and one Iranian are writing letters to each other, reflecting on their lives, between two revolutions that changed their lives and societies forever.

A married couple’s search for a way how to preserve a long-term, honest relationship in environment, where infidelity is normal practice.

He fought for his country, now he is fighting for his family.

A reflection about survivor’s guilt, traumas and how war is the new normality for young creative people in Ukraine.

A middle-aged divorced Budapesti man who eagerly deals with organizing his life after separation in his big house, on the other hand, finds it hardly possible to avoid loneliness.