The Katrin Cartlidge Foundation Award, traditionally announced at the Sarajevo Film Festival, has been awarded to the young director Dyana Gaye. Her short film DEWENTI was screened tonight at the !hej Open Air cinema. 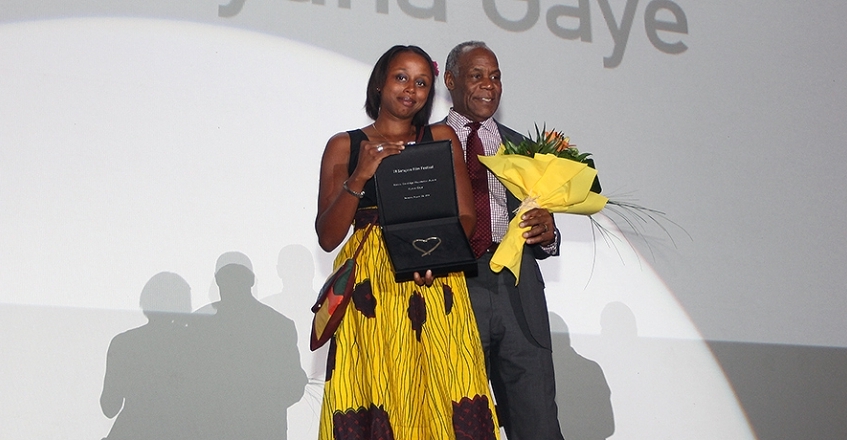 Dyana Gaye was born in Paris in 1975, and graduated from the University of Paris VIII - Saint-Denis with a Master of Film Studies. In 1999, she won the Scholarship Louis Lumière - Villa Medicis Hors les murs for her screenplay UNE FEMME POUR SOULEYMANE and which will obtain numerous awards at international festivals. Meanwhile, Dyana Gaye worked as a programmer to ACID (Agency for the Independent Film Distribution) for several years. In 2004, she realized J’AI DEUX AMOURS that is part of a series of 15 short films titled PARIS, LA MÉTISSE. Her latest short film, DEWENETI has received numerous awards and was nominated for the César for short film in 2008.

ABOUT KATRIN CARTLIDGE FOUNDATION
Motivated by Katrin’s inspiring presence, the Foundation’s work is to give new voices, new perspectives and visions a chance to be seen and heard. For the last nine years the Foundation has appointed a curator, selected from Katrin’s eclectic and extensive friends and colleagues, who in turn chooses a recipient for the annual bursary. The recipient is a new cinematic voice whose work, in some way, embodies Katrin’s integrity of spirit and commitment to independent film.

We are grateful for the generosity and vision of our curators to date; The actors Charlotte Rampling, Emily Watson and Stellan Skarsgard, directors Mike Leigh, Simon McBurney and Danis Tanovic, as well as John Lyons, Annie Nocenti and photographer Juergen Teller.

The recipient is presented with the Award, a cash bursary, at a special red carpet gala at the Sarajevo Film Festival.

The Foundation, through it’s trustees and patrons, also commits to helping the young filmmakers however they can, with practical and creative support.